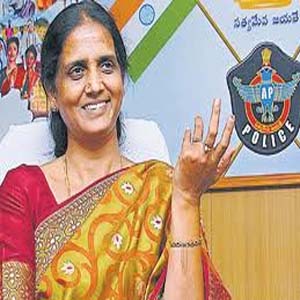 Sabitha Indra Reddy Date of Birth is 05-05-1963.Qualification is B.S.C. Now she is Minister for Home, General Police Administration, Jails and Correctional Services, Fire and Emergency Services and Sainik Welfare. She is the first Woman Home minister of Andhra Pradesh.

* Sabitha Indra Reddy entered into politics through bye-elections in 2000 when sri.P.Indra Reddy died in road accident. She was elected as MLA from Chevella constituency.
* In 2004 General Elections also she was Re- elected from the same constituency.
* She was made the Minister for Information Technology, Mines and Infrastructure.
* She was made the Minister for Mines and Geology, Hand looms and Textiles in the Cabinet reshuffle in 2007.
* In 2009 General Elections she was elected as M.L.A from Maheswaram constituency.
* Now she is the Home minister of Andhra Pradesh.
* Sabitha Indra Reddy is a woman of substance, success and selfless service. Sabitha Indra reddy is a Amazing Person.
* She is having People-friendly Approach.
* Sabitha Indra Reddy is having Successful Track record.
* She is having active role in state congress party.
* She is currently handling Minister for Home, General Police Administration, Jails and Correctional Services, Fire and Emergency Services and Sainik Welfare.

Sabitha Indra Reddy plays very important role in state government. Sabitha Indra Reddy plays fundamental role as the impressive Home Minister of State. She has accepted this wonderful responsibility with much easier composure. She is the most energetic minister and Member of Parliament in Andhra Pradesh Legislative Assembly. She always gets involved in the serious discussions, negotiations and policy making proceedings of the House. She participates in the House with her greater commitment, awareness and domain expertise.

Sabitha Indra Reddy Launched new Strategies in the state government. These are