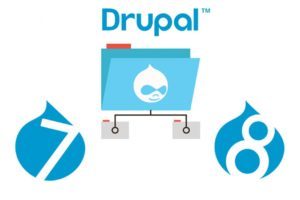 Drupal is the num.1 platform for web content management among global enterprises, governments, higher education institutions, and NGOs. Flexible and highly scalable, Drupal publishes a single web site or shares content in multiple languages across many devices. Technology and business leaders transform content management into powerful digital solutions with Drupal… backed by one of the world’s most innovative open source communities.

Originally written by Dries Buytaert as a message board, Drupal became an open source project in 2001. The name Drupal represents an English rendering of the Dutch word “druppel”, which means “drop” (as in “a water droplet”). The name came from the now-defunct Drop.org Web site, whose code slowly evolved into Drupal. Buytaert wanted to call the site “dorp” (Dutch for “village”) for its community aspects, but mistyped it when checking the domain name and thought the error sounded better.

Interest in Drupal got a significant boost in 2003 when it helped build “DeanSpace” for Howard Dean, one of the candidates in the U.S. Democratic Party’s primary campaign for the 2004 U.S. presidential election. DeanSpace used open-source sharing of Drupal to support a decentralized network of approximately 50 disparate, unofficial pro-Dean websites that allowed users to communicate directly with one another as well as with the campaign. After Dean ended his campaign, members of his Web team continued to pursue their interest in developing a Web platform that could aid political activism by launching CivicSpace Labs in July 2004, “the first company with full-time employees that was developing and distributing Drupal technology”. Other companies began to also specialize in Drupal development. By 2013 the Drupal Web site listed hundreds of vendors that offered Drupal-related services.

As of 2014 Drupal is developed by a community, and its popularity is growing rapidly.[citation needed] From July 2007 to June 2008 the Drupal.org site provided more than 1.4 million downloads of Drupal software, an increase ofapproximately 125% from the previous year.

As of January 2017 more than 1,180,000 sites use Drupal.These include hundreds of well-known organizations,including corporations, media and publishing companies, governments, non-profits, schools, and individuals. Drupal has won several Packt Open Source CMS Awards and won the Webware 100 three times in a row.

On March 5, 2009 Buytaert announced a code freeze for Drupal 7 for September 1, 2009. Drupal 7 was released on January 5, 2011, with release parties in several countries. After that, maintenance on Drupal 5 stopped, with only Drupal 7 and Drupal 6 maintained. Drupal 7 series maintenance updates are released regularly.

Drupal 8.0.0 was released on November 19, 2015. A subsequent upgrade to it is also available in the form of Drupal 8.1.0 that brings numerous improvements, including CKEditor WYSIWYG enhancements, added APIs, an improved help page, and two new experimental modules. Experimental modules are meant for testing purposes, but are not yet fully supported.

The possibilities for adding custom modules to Drupal are virtually endless. With over 16,000 add-on modules Drupal gives everyone from hardcore web developers to bloggers with limited HTML experience the power of choice. Whether you need to add a shopping cart to your website or want to add a comments section to your blog, Drupal allows you to customize to your heart’s content.

But what really empowers businesses when they have the freedom to choose? Whether you’re hiring third party developers to build your site, or are on a DIY kick to bring your site up to date, Drupal’s customizable modules allow you to scale your website at a pace that works for your business.

Say you’re just getting started with a website and only want to create a splash page to let customers and investors alike know that you exist, you can do so easily with Drupal, you’ll also have the ability down the road to support different types of content such as video and podcasts, and you’ll be able to add a plethora of different user functionalities that are critical to e-commerce and/or publication sites. Need further proof that Drupal is scalable? Huge websites such as Princess Cruises, Zappos, and Even the White House use Drupal for their web building needs.

One thing that makes Drupal completely unique is the community of people that support and add to it. Because Drupal is an open-source software solution its modules are made available to the public without relying on astronomically priced licensing fees. What’s more, Drupal owes its competitive advantage the expert ‘volunteers’ that help solve issues in the site’s online forums as well as their in-house developers that get revved up about building new technologies for websites.

Drupal’s community is one built out of passion when it comes to development and it doesn’t matter if you’re a novice trying learn as much as you can about building sites, a veteran developer, or an entrepreneur that needs a site built for them—Drupal offers a sincere forum for people who want to develop the best websites in the world.

An administrator can create new user accounts and establish their permission rights. Users can be divided into groups and can be given assignments. They can be given permissions to manage parts of your website.