Just a day before completing the deadline for giving its recommendations on the Telangana issue, the B N Srikrishna committee presented its report to the government on December 30 2010 , hoping it would show a way forward.

The Union government has decided to call political parties of Andhra Pradesh on January 6 to discuss the contents and hold detailed discussions on law and order. It is expected the government will make the report public soon, after the discussions.

?We have given the way forward,? said Vinod K Duggal, the panel?s member-secretary, soon after the report was given to Home Minister P Chidambaram.

Not giving out any details of the two-volume report, retired justice B N Srikrishna said the home minister would first convene the meeting of all political parties. The committee members have also spoken to political parties and leaders from Andhra Pradesh and have asked them to help maintain law and order once the report is made public. 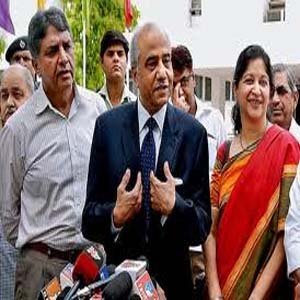 Interestingly, all political parties have assured cooperation on this.

?You pose all your questions to the government now,? Srikrishna said after meeting the home minister. The Union government had asked the committee members to consult all sections of the people, especially political parties, industry, trade, trade unions, farmer organisations, women?s organisations and students? organisations.

Government of India after holding consultations with eight recognized political parties on the telangana issue has set up the Sri Krishna Committee to study the current situation in Andhra Pradesh on February 3. Sri Krishna Committee was formed to study the political and social issues that are plaguing the state of Andhra Pradesh. The main purpose of Sri Krishna committee is to give suggestions and recommendations on the demand for separate state of telangana.

Sri Krishna Committee started taking opinions from all quarters of public on the topics of United Andhra, Telangana and Hyderabad.

Committee has requested to send public opinion to Sri Krishna committee at vkduggal.ccsap@mha.gov.in . Committee also suggested public to send there opinions through post and phone (011-21022330) Fax (011-23022444). But the committee informed public that the suggestions are accepted till April 2010.

Mails are requested to the following address

The following are the seven-point Terms of Reference of the Sri Krishna Committee:

(2) To review the developments in the State since its formation and their impact on the progress and development of the different regions of the State.

(3) To examine the impact of the recent developments in the State on the different sections of the people such as women, children, students, minorities, other backward classes, scheduled castes and scheduled tribes.

(4) To identify the key issues that must be addressed while considering the matters mentioned in items (1), (2) and (3) above.

(5) To consult all sections of the people, especially the political parties, on the aforesaid matters and elicit their views; to seek from the political parties and other organizations a range of solutions that would resolve the present difficult situation and promote the welfare of all sections of the people; to identify the optimal solutions for this purpose; and to recommend a plan of action and a road map.

(6) To consult other organizations of civil society such as industry, trade, trade unions, farmers? organisations, women?s organisations and students? organisations on the aforesaid matters and elicit their views with specific reference to the all round development of the different regions of the State.

(7) To make any other suggestion or recommendation that the Committee may deem appropriate.